What is a Viva GT? 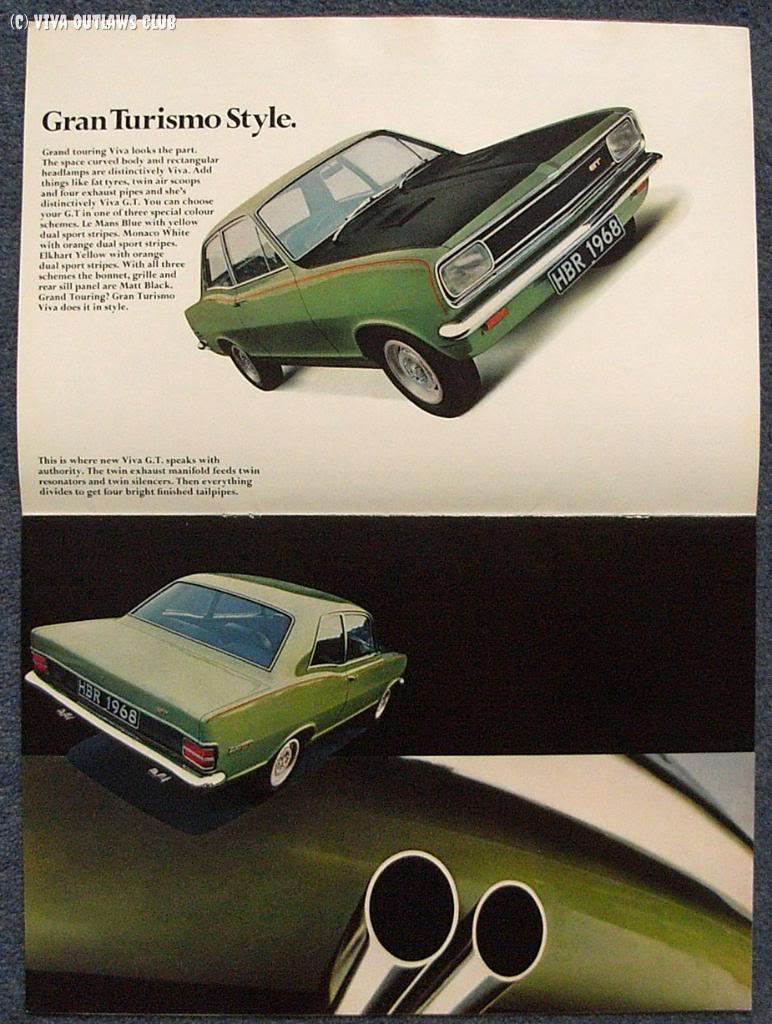 The Viva GT was launched in March 1968, nearly 2 years after the first HB Viva appeared. It was the first ever Vauxhall to wear the GT badge. The cars official designation was ‘HBR’ Viva GT.

There were basically two marks of GT, MKI and the rarer MKII. The car is powered by a 1975cc O.H.C slant 4 cylinder engine, rated at 104 BHP(Net) with twin Stromberg carbs. This came directly from the FD Victor, but did not see service in this form until the VX 4-90 was re-launched in ’69/70.

There are a few cars known as MK1 &1/2s. These were MKI cars fitted with some of the new MKII features. It was a way of dressing up the old MKIs and passing them off as virtual MKIIs. With the boy racer imagine of the MKI, Vauxhall took heed of all the comments and toned down the MKII. The features which were used from the MKIIs varied on each MKI&1/2, hence this is rather a grey area.

Total production of the GT(MKI & II) was 4606 units and the majority were exported. The Viva GT was quite FAST in its day and had a good racing history under the control of Gerry Marshall. Racing Viva GTs were modified by Bill Blydenstein and virtually 200 BHP was possible out of the once docile and lazy Vauxhall lump. For the Canadian market it was known as the ‘EPIC GT’. Basically this was half a Deluxe and half a Viva GT. The Deluxe parts being the trim and lack of bright work. Canada was one of the main importers of the Viva GT. 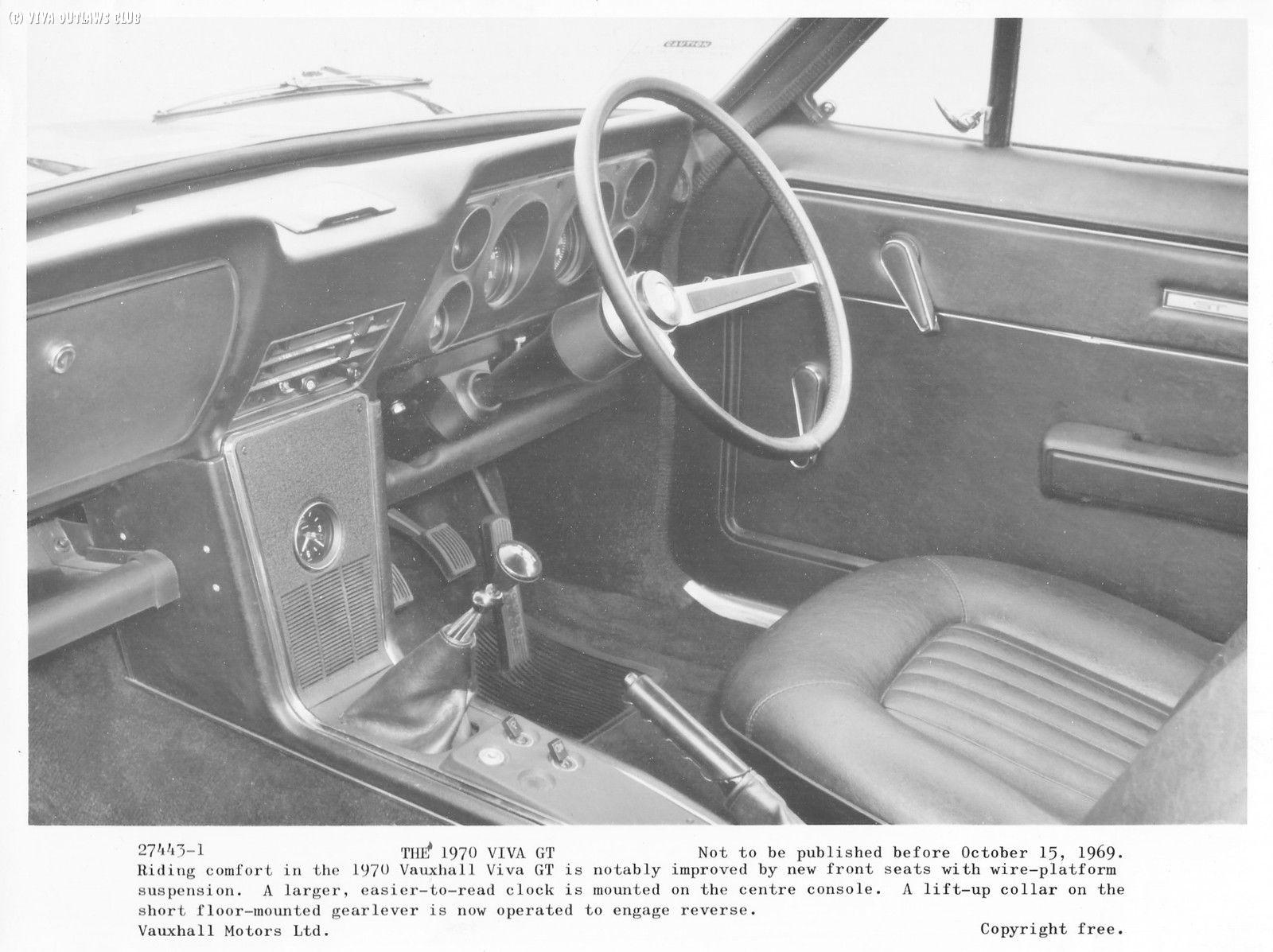 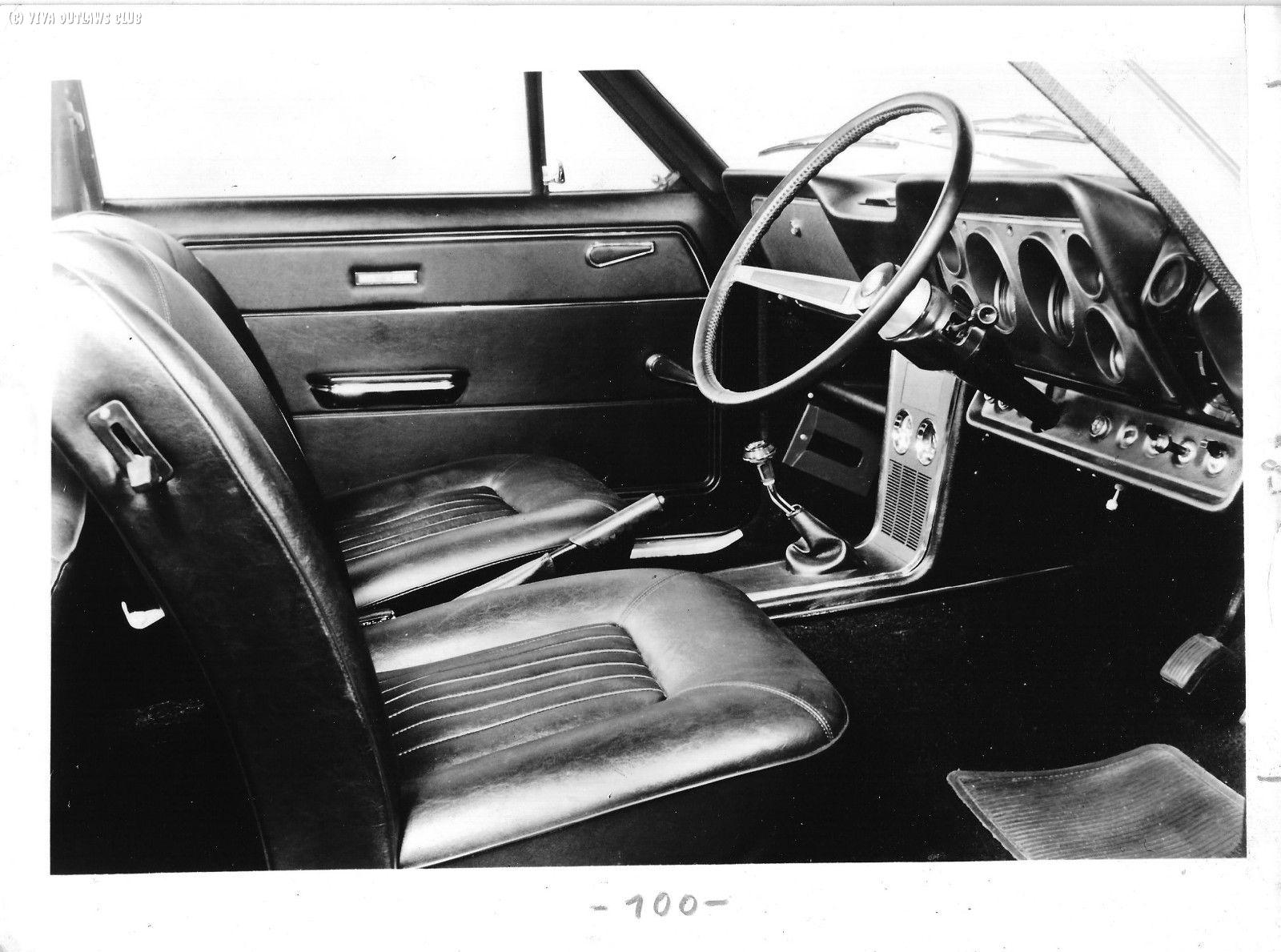 Included a special bonnet with 2 air scoops, front grill, ‘GT’ badging on the rear wings, front grill and boot. Wheels were 13″, MKIs used 4 &1/2″ rims with bright alloy wheel embellishers while the MKII used Rostyles.
Door frames and rear quarter windows were fitted with stainless steel trimming. A double body stripe (MKIIs stripe was even wider) and unique paint colours of Le Mans Blue and Elkhart Yellow. The other MKI colour was Monaco White, the MKI&1/2 included Sebring Silver Starmist and Monza Red. MKIIs dropped the Elkhart Yellow, but added Goodwood Green. All MKIs and some MKI&1/2s had the bonnet painted Matt Black along with the rear panel, while the MKII only used matt black on the rear panel. 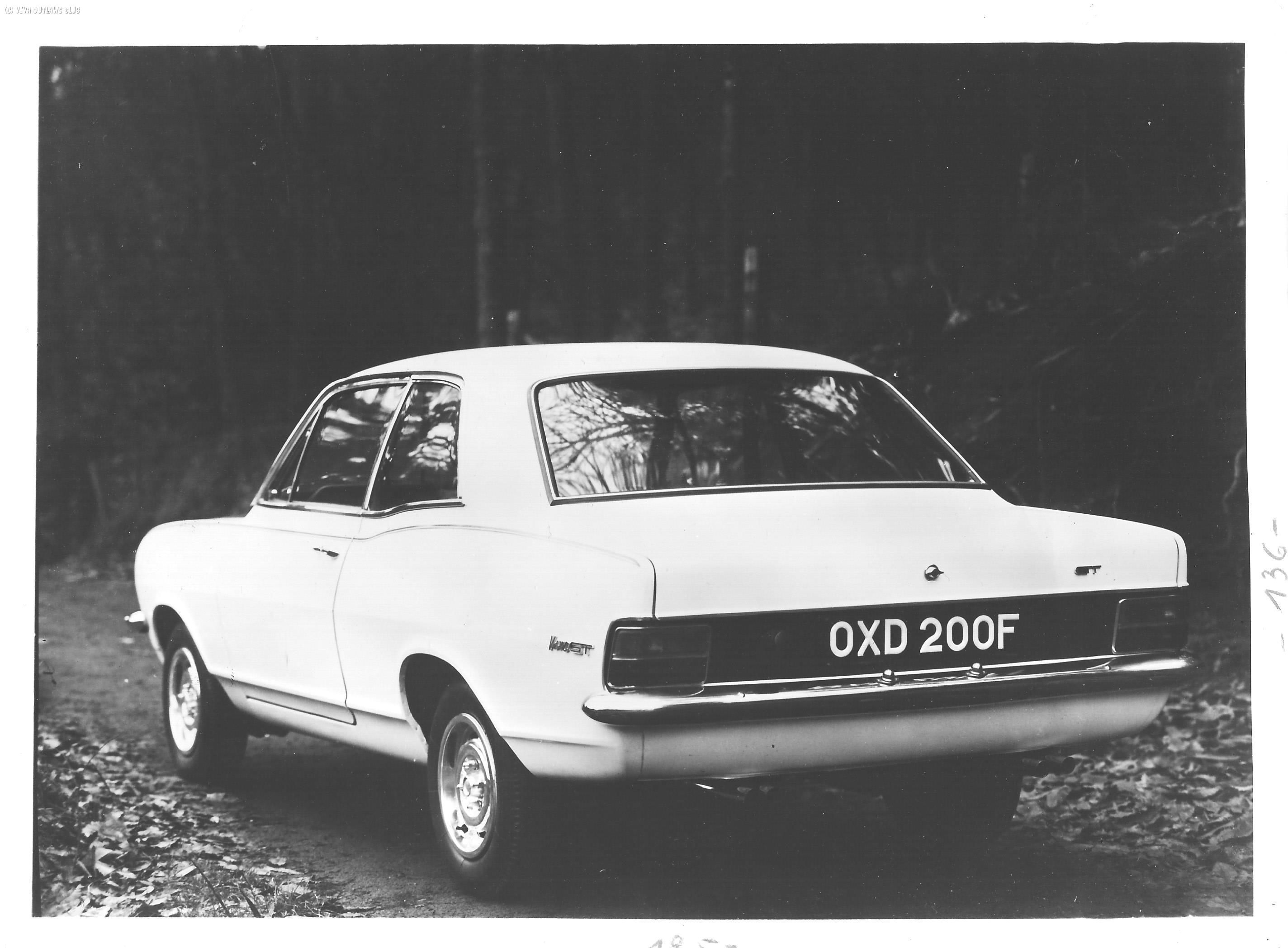 OXD200F was one of the original Mk1 GT press cars. Here you can see the matt black rear panel and bright aluminium wheel trims 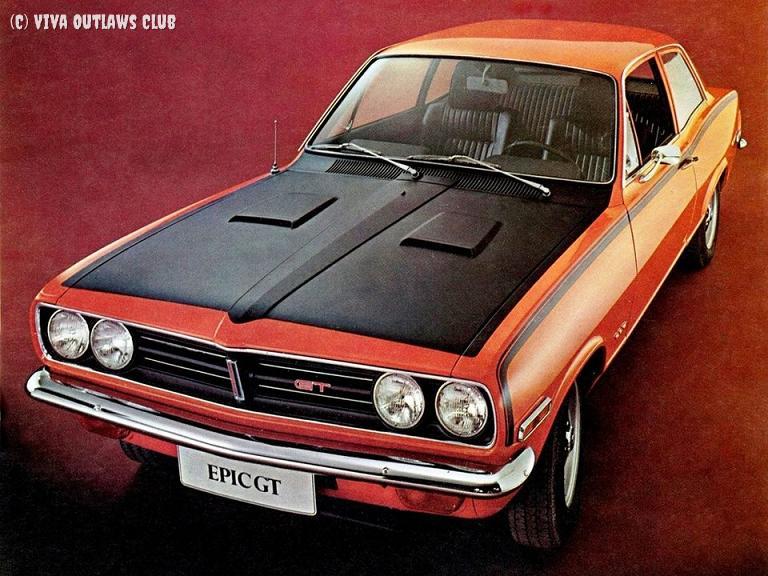 MKIs used a close ratio gearbox (Rated at 180 BHP) as found in early FD Ventoras. MKIIs had a more standard ratio with a different gear linkage (same as the later Magnums) and a ‘Mushroom’ headed gearstick with a lock out for reverse gear.
The rear axle was basically a narrowed and modified FB/FC/FD Victor item, MKIs used a ratio of 3.9:1 and an extended pinion, while the MKII used 3.4:1 ratio and a short pinion. MKIIs used a two piece prop-shaft while MKIs used a single piece item. A front anti-roll bar was fitted and the MKII saw one fitted to the rear as well. The front cross-members differed from the standard HB with the MKIs engine mounts allowing the engine to sit on top of them. The MKII used the side mounting shear type, but need a straining cable, bolting from the bell-housing back to the gearbox cross-member.
The front and rear springs, and shock absorbers were all uprated from the standard HB to cope with the extra power. Early engines used an alloy sump (up to Eng No 3046080), while later ones were of steel construction. The MKI used a twin exhaust system (basically 2 x HB SL90 exhausts systems) with 4 tail pipes!! MKIIs used a single system very similar to the later OHC Magnums.

All GT chassis numbers began with 93711 (apart from the Canadian Epic GT) and then follow as MKIs 8V118773 – 8V171756, MKI&1/2 9E225001 – 0E359267 and MKIIs 0E359268 onwards. Other Vauxhalls built at this time also used the same band of numbers, hence the bands are wide. The MKI chassis plate (found on the slam panel) is very easy to remove, so the GT can be re-shelled. Dubious persons can easily try to flog you a made up Viva GT, but check everything else out first. The MKII chassis plate is found on the dash top and can only be viewed through the windscreen on the near side.

All parts unique to the Viva GT have not been available new for many years. In fact parts were difficult to obtain when the cars were new, hence locating anything for the GT is extremely unlikely. Owners help each other out as and when they can with second-hand parts. Putting adverts in Classic Car Mags or attending the Rallies or Shows throughout the year, are your best bets for locating that missing part. Parts rarely turn up at Autojumbles for the Viva GT. Parts from any of the obsolete Vauxhall parts specialists can be very expensive. They all know of the parts problems with the Viva GT. Vauxhall never gave their old stock to clubs or allowed specialists to buy them up in bulk. They just smashed them up and/or dumped them at scrapyards. So finding a pair of steel front wings is very difficult, especially as pattern parts never existed.  All repair panels are again hard to find, wheel arches especially.  As time goes by the job of finding panels to complete any HB Viva restoration gets harder.

The Price to pay for a GT

Unfortunately even though they are rare cars, their prices do not reflect this. If they were a Ford, the prices would be at least double. A real rusting heap will go from as little as £300+, an MOT failure/in need of serious work might fetch £700 – £1000, useable with no major faults from £1800 – £3500, and a good all round condition one (not concours) could fetch from £4500 – £6000. Obviously concours are very few and far between so the price is really up to the individual. All these prices are only a rough guide and are not gospel.

With 104 BHP on tap you would expect it to beat a lot of its contemporaries. The engine in standard form is a lazy one, with lots of torque, so speed is gained through powering the car along. Unlike modern cars, which use extremely high revving engines. Even so the GT is still a great car to drive and will surprise many other road users. There are still a few easy tweaks to turn your standard GT into a car with an actual racer feel to it. Vauxhalls design was for a Sporting Family Saloon, hence the emphasis was on comfort rather than race ability.
0 – 60 mph = 10.7 secs (MKI), 12.1 secs (MKII)
Max speed = 99/100 mph
1/4 Mile = 18.3 secs (MKI), 18.5 secs (MKII)
The MKI is faster off the line due to the lower rear axle ratio of 3.9:1.

Finding a totally standard Viva GT these days is virtually impossible. This is mostly due to their nature and who would actually own such a car, meaning they all have been tweaked to some degree, whether engine wise or interior or exterior.
The easiest way to increase power is to fit the later 2300 engine from a Firenza or Magnum. (No substitute for ‘cubes’ as they say) It is far more effective than spending money trying to do it to the original 2.0 litre engine. The 2.3L engine was raced in many disguises to great effect, using hairy cams, big valve heads, extractor exhaust manifold and twin 45 Weber induction set-ups.
Higher modifications include fitting a Lotus twin cam head onto a 2.3L bottom end, mimicking the Twin cam Vauxhall engine found in the HS Chevettes.

Gearboxes could be upgraded to the Getrag, but the strongest and more favored was the ZF 5 speed.
The front suspension set up on the early MKI can be easily tweaked so it gives negative camber, rather than positive (The Hillman Imp look). This seriously aids basic handling. An extra front anti-roll bar, if found, could be fitted to the top wishbones as per racing HBs. The rear suspension is easily boxed for strength and also for ease of basic jacking the car up! These days’ poly bushes are available for most, but not all the joints on an HB suspension set up front and back. Cheaper rubber ones are still available through Jenson Healy specialists.
Wheels for Viva GT have always been thin on the ground when it comes to choice. Many people favor the Rostyle over the standard early aluminum trimmed steel wheels. Revolution, Wolfrace or Cobra slots, Appliance steel spoke, Chrome 8 spoke, are all now difficult to find. Minilite copies are available, but you need the 6” and 7” to make the car look the racing part, but unfortunately the tyres will foul somewhere.
Fibre glass wheel arches as per racing HB are available, along with bonnets and boots if you wish to build a racer look-a-like.

At present approximately 150 GTs are registered on ‘THE VIVA GT REGISTER’ and very possibly 75% of these do not exist anymore. The Register is run by GUY TURNER, 25 MILL DROVE, UCKFIELD, EAST SUSSEX. TN22 5AB. Telephone 01825 – 761729. To have your GT included on the Register, send all the details from your Registration Document to Guy. A spare photo of your GT would be most welcome for the Register File. If you need any information, authentication, technical assistance or tips on modifications, again contact Guy Turner. He will always try to help you sort your problems out.